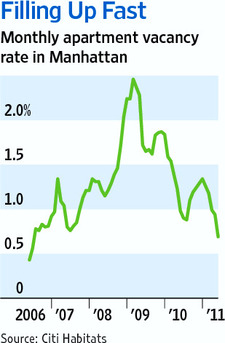 By CRAIG KARMIN and DAWN WOTAPKA in the Wall Street Journal, June 9, 2011

The dog days of summer are back for apartment renters.

The Manhattan vacancy rate in May fell to 0.7%, its lowest level in nearly five years, according to broker Citi Habitats. Landlord concessions, such as a free month’s rent for signing a new lease, have dried up. Average Manhattan rental prices are just a hair below their 2007 peaks.

Renters also are encountering something few have seen since the economic-boom days: bidding wars.

Edward and Tonya Treble of Indiana recently tried to lease an East 80th Street one-bedroom being offered for $2,300 a month. They were told that five other renters wanted the apartment. So they offered an extra $200 a month in rent to close the deal.

“We knew that we had to act quickly,” says Mr. Treble, a 34-year-old former Marine who will soon be working for Pfizer Inc.

Several factors—from limited supply in some hot neighborhoods to a lingering aversion to buying an apartment in the wake of the housing market collapse—explain why the city’s rental market is heating up.

With the thermometer rising, the rental market could get even hotter. The end of May through September is usually the busiest time of the year for apartment rentals. Recent college graduates and other new arrivals pour in, and brokers say existing tenants prefer to look for new digs when the weather is warmer.

The financial crisis and heavy job losses in the city upended that dynamic in 2008 and 2009. Landlords were compelled to pay brokers’ fees, ranging from a month’s rent to 15% of the first year’s rent, and offer up to two months’ free rent to lure tenants. At the low point in 2009, 60% of all Manhattan rental transactions involved some kind of landlord concession, Citi Habitats says.

In May 2011, however only 8% of rentals involved these concessions, Citi Habitats says. For the most part, concessions can now be found only at new buildings, where leasing quickly is essential, says David Vivero, chief executive of RentJuice, which provides marketing software to the rental industry.

Rent declines have reversed. In May, the average Manhattan monthly rent, a blend of all sizes and price points, was $3,353—only 1.2% below the market’s peak level in May 2007. In the city’s most coveted neighborhoods, vacancies barely exist: Only 0.25% of the units are empty in the West Village, for example.

“It’s night and day compared to what it was even 12 months ago,” says Gary Malin, Citi Habitats’ president.

The slow but steadily improving New York economy has been drawing new workers to the city. But with job anxiety still high among many New York professionals, they remain skittish about buying a home—or have been unable to get a mortgage loan—and continue renting.

She says rents at new rental buildings in Williamsburg and downtown Brooklyn are only about 10% below comparable apartments in neighborhoods near Times Square and the Financial District. A few years ago, Ms. Packes says, the difference was around 30%.

Another contributing factor may be the city’s recent enforcement of a long-ignored code prohibiting tenants from erecting partitions in their rental units. The city’s crackdown follows a 2005 fire in a Bronx building that had illegal dividers and was seen as contributing to the deaths of two firefighters.

For years, young renters eager to live in Manhattan had used these partitions to transform large one-bedrooms into spaces for two people, or turned two- into three-bedroom apartments. Now with landlords under pressure to follow the code, these arrangements are disappearing. That in turn is increasing demand for smaller one-bedrooms and studios, Ms. Packes says.