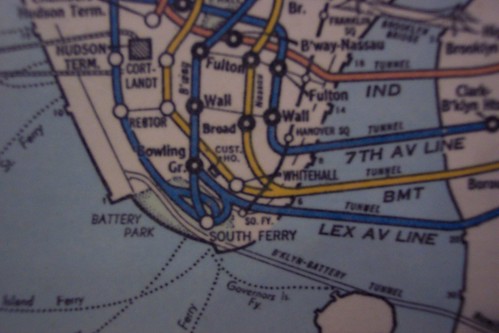 MultiHousing News Online has an interesting article of the transformation of the Financial District into New York City’s newest housing area. I can personally attest to the fact that the area is being transformed more and more by the day. For the first time, there are even some people on the streets at night. I’ll let the author, Jessica Fiur of MHN tell you more:

New York—When people think of Manhattan’s Financial District, they picture the newly constructed World Trade Center memorial, the bell signaling the start of trading on Wall Street and a very large bronze bull sculpture. What they don’t imagine is parents taking their children to school, bustling restaurants and shopping, and luxury apartments and condos. But that view is soon to change.

In the last 10 years alone, FiDi’s population has doubled. And currently there are 28,500 residential units. While impressive, this isn’t the first time the area has seen residents. Years ago, before it was the financial and business capital of the city (and the country), many people lived downtown.

Developers and property managers have taken advantage of the downtown housing boom. Not only has the population grown, but in the last 10 years, rents have increased by 33 percent, according to research by the Alliance for Downtown New York.

One might assume that FiDi is populated with young professionals, and while, according to Shapiro, “FiDi is where a lot of younger couples are moving,” the many schools and parks downtown are attracting families.

These kid-friendly attractions have an added bonus for parents living downtown.

“[They’re] great for families who want to get their kids out of the apartments,” Jennings joked.

Though FiDi is attracting buyers and renters, there are still a few drawbacks to the area.

According to Shapiro, the chief complaint from residents is that the amenities take a while to catch up to the apartment demand. For example, supermarkets are a little slow to develop.

On the other hand, while amenities might take a while to develop, luxury buildings are springing up all over the neighborhood, which was evident in the building the event was held in, 20 Pine.

The doorman building, designed by Armani/CASA, contains amenities such as a lap pool, golf simulator, spa, fitness center, billiards room, library and a private entrance to the nearby subways.

The building, a former Chase bank built in 1928, was converted to condos in 2006. According to Natalie Bowen, sales associate of 20 Pine, 90 percent of the units are already sold.

If every building in FiDi has as few vacancies as 20 Pine, there is no doubt that the area will become a developer’s dream. And, while it might not quite be there yet, that’s not necessarily a bad thing.

Ultimately, the area once known for well-heeled investment bankers and stockbrokers rushing to work might soon be better associated with moms pushing strollers and young couples shopping for groceries. And why not? It certainly makes a good story for prospective residents.

“The history of this neighborhood is so rich,” Gold tells MHN. “If you’re aware of the past that happened on the streets you walk on, it makes the present more interesting.”