We have our own running of the bulls (bull?) here in NYC – the quarterly reports on the state of the Manhattan rental apartment market. But this time, Kim Velsey nailed it. It is scary!

Watching the Manhattan rental market is like watching Saw. It’s fascinating and terrible and nauseating all at the same time.

Rents are at their highest level in two years, with the median rental price shooting up 7.9 percent from the same quarter last year, according to the Prudential Douglas Elliman report prepared by Jonathan Miller. Brace yourselves: we’re now at $3,125, up from $2,895 in the second quarter of 2011.

The situation is dire, yes, but not hopeless, reports Citi Habitats. Compared to the previous quarter, rents have remained relatively stable, Citi Habitats tells us, albeit at record high levels. And there’s more good news (our protagonist has sent a text message to an attentive friend, who has every intention of calling the police!). The overall vacancy rate has actually gone up compared to the same quarter last year, from 0.72 percent in 2011 to 0.97 percent in 2012. Douglas Elliman reports that listing inventory rose 27.9 percent, from 4,427 available last year to 5,660 units this year.

The vacancy rate could indicate that tenants are postponing their search until after the summer “busy season,” Citi Habitats notes, or “perhaps they have reached their ‘pain threshold’ and are looking at opportunities in the outer boroughs or in the city’s sales market.” The outer boroughs? Now you’re really scaring us.

But what about concessions?, you may ask. You shouldn’t have asked. Because when it comes to concessions, there is truly no mercy. Only 3.7 percent of rentals gave concessions (and the concessions were mostly in new buildings and they were mostly one month’s free rent).

Finding a reasonably priced apartment in Manhattan may be more difficult than escaping from a killer’s house of horrors, but look to the Upper East Side, recommends Douglas Elliman. Rental rates on studios there dropped an average of $40 in June. Just stay away from Chelsea, which promises certain doom: the price went up an average of $71 in June, with non-doorman two-bedrooms in the neighborhood going up $105 a month. Which is so terrifying that we need to stop writing. We can’t watch any more of this. 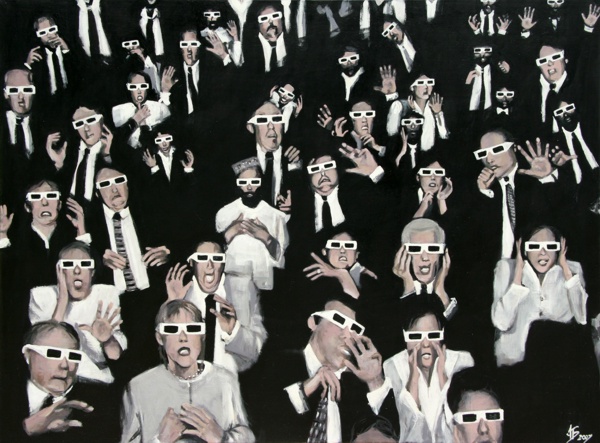 Manhattan rental apartment prices get the usual reaction from this audience of real estate professionals.